A steaming bowl of Japanese ramen is the perfect comfort food on a drizzly spring day. And for something different, several of Hong Kong’s ramen spots are offering a new twist on the same old traditional salt-based shio, soy-based shoyu, soybean paste-flavored miso and pork bone broth-based tonkotsu.

The secret to its distinctive taste is the complexity of its layered ingredients, which consists of yuzu, chicken, seaweed and different varieties of dried fish and veggies, Afuri’s CEO Taichi Ishizuki explained.

“I never get tired of eating it every day,” said Ishizuki. “Every sip of soup and slurp of noodles is clean and refreshing.”

And there is also the yuzu cocktail (HK$62) made with rum, lime juice, yuzu, honey and sparkling wine to keep you energized.

Office workers and shopaholics at the IFC mall must try Konjiki Hototogisu, a newly opened ramen house that received a Michelin star both last and this year.

The eatery has gained acclaim for its homemade “golden soup” base, a blend of fish and pork-based stocks with a secret clam brew.

Another golden soup ramen is the shio hamaguchi soup ramen (HK$128), which is served with Japanese sea salt and topped with white truffle oil, providing an aromatic and distinctive smell.

Fried chicken is also a delightful eat to enjoy alongside a bowl of ramen. The fried hanamidori chicken (HK$88) is first marinated then deep-fried at 300 degrees, ensuring a crispy exterior while keeping the meat juicy. Dip it in a mixed sauce with honey and mustard to give it a sweet yet warm taste.

Ippudo, a popular go-to among Hongkongers, offers up a new delicate oyster shoyu ramen (HK$98). Complementing sweet and succulent Hiroshima oysters with a rich tonkotsu and chicken broth brings out an ocean-nurtured sweetness, which goes superbly with the homemade slow-cooked BBQ pork.

Guests can also try the mini oyster baked rice (HK$48) that presents an irresistible aroma with roasted oysters covered in cheese. All are on offer until March 17 at every Ippudo branch.

Inspired by the diverse cuisine across Asia, Yum Mee at K11 Musea has introduced more than 10 varieties of noodles. Each dish stands for its own delightful journey, with every bowl representing an Asian city.

One worth mentioning is the Kyoto king crab soy sauce ramen (HK$198) bathed in a pork and chicken bone soup base. Served with a house-made black soy sauce to strengthen the taste, the bowl is a culinary thrill with its Kyoto crab legs and Japenese onsen eggs.

And to wash it all down, a special mention must go to Yum Mee’s citrus house blend tea series and iced bear series. The latter features black iced bears (from HK$34), white iced bears (HK$46) and magic iced bears (HK$38) made of tea, coconut and butterfly pea tea, respectively.

(This article was published at The Standard on February 28, 2020: Weekend Glitz: Raving over ramen ) 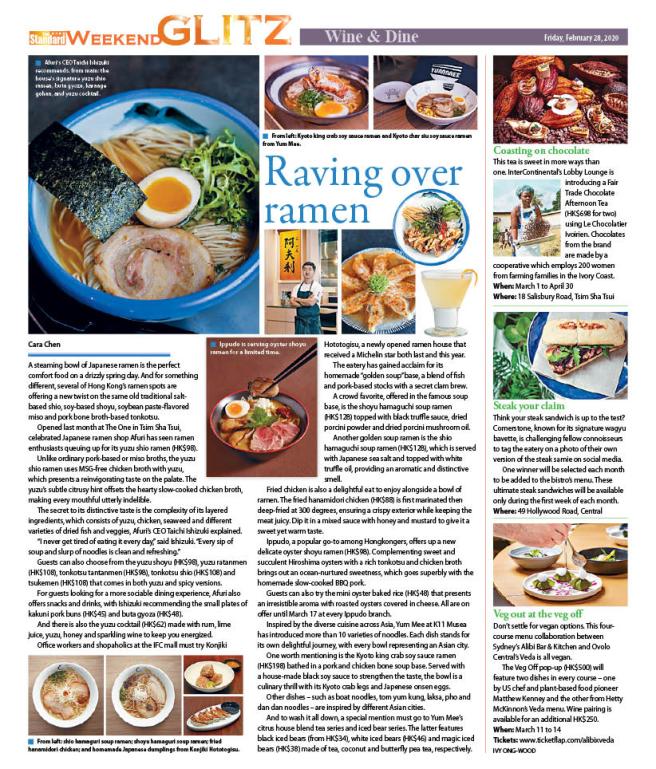