Chan hei-lui used to attend rehabilitation training twice a week at the government’s Early Education and Training Centre. But the Covid-19 pandemic has left the developmentally delayed four-year-old stranded at home since January, and her mother Kwan Pui-shan has become increasingly worried.

Hei-lui, who is repeating K1, participates in online classes offered by her kindergarten, but the challenges she faces are not just academic.

“It is not easy to have classes at home,” Kwan said. “Sometimes, her two-year-old sister would answer the teacher’s questions before her, which was very frustrating for her.”

With her rehabilitation training halted for almost three months, the girl has seen setbacks in areas such as muscle endurance, emotional management and concentration. “I’m not a professional and don’t know how to help her,” said Kwan. Most of the time at home, she just lets her daughters watch TV to kill time.

However, a training-at-home solution has opened up a new horizon for the mother and daughter.

Their family was selected to try out a special education needs distant learning platform supported in collaboration by the Bridge Academy Education Centre and Hong Kong Applied Science and Technology Research Institute.

The SEN platform requires an electronic device and a camera – both of which the school provides.

Instead of having to visit the special education school, program supervisors from Bridge Academy will come to the users’ home for a two-hour assessment of the child before offering an individualized program, followed by another two-hour session that teaches parents how to use the platform.

Before each daily one-hour session, parents may preview the training content, which contains 10 to 12 tasks such as identifying graphics or learning to wait patiently for a certain amount of time, similar to the usual school activities.

After starting the lesson, parents are required to enter a webpage to check off the task list and rate the child’s performance for each task with four options: can finish, cannot finish, finish with help or finish over time. Task details can also be reviewed if the parents forget how to conduct the training.

The parents’ ratings will serve as a basis for subsequent training content based on AI technology, but program supervisors will make the final decision based on the recorded video of the training.

Supervisors will also conduct a half-an-hour video conference with parents every week to follow up on the training process, prepare training tools and suggest daily materials for training.

The AI database is made up of more than 100 individualized programs the center has been collecting since November. Running for over six years and training more than 300 SEN students, the center initially wanted to use data from over 3,000 programs to develop the platform. “But the pandemic has left more than two thirds of the center’s students unable to train, so the platform was launched earlier than planned,” said Victor Wong, founder and head of the center.

With a support team of 18 people operating the platform, the overall training efficiency has been improved thanks to the database and AI technology.

Bosco Chan, a specialist in pediatrics and a consultant at the center, is delighted to see that the center has provided a solution in line with the latest trends.

“Many parents do not have relevant training knowledge to take care of their children,” he said. “Even if they do, children may not be able to adapt because they are usually trained by professionals, but now by a new person instead.”

As parents training SEN children will be the new norm, parents should be offered help.

“Rehabilitation training for SEN children requires repetition and continuity as they often struggle to adapt to sudden changes. How to respond to these situations has always been what educators want to help parents,” Chan said.

For the first two days, Kwan said her daughter was “in the groove” because she thought her mother was willing to play with her. But the novelty soon wore off and she began to lose her temper again.

Kwan asked the supervisor for advice and changed the tasks accordingly. “Sitting still and training every day, her life became more scheduled,” she said.

Not only do children have to adapt to the new norm, but parents too. Kwan said she gave up easily in the beginning, especially whenever her daughter acted up. “The therapist taught me to change the tools or the order of games. If she finishes, I can reward her with her favorite paper-cutting game to extend her concentration; if she loses her patience, I can try giving clearer instructions instead of giving up.”

(This article was published at The Standard on May 5, 2020: Education: How to appeal to the SENses ) 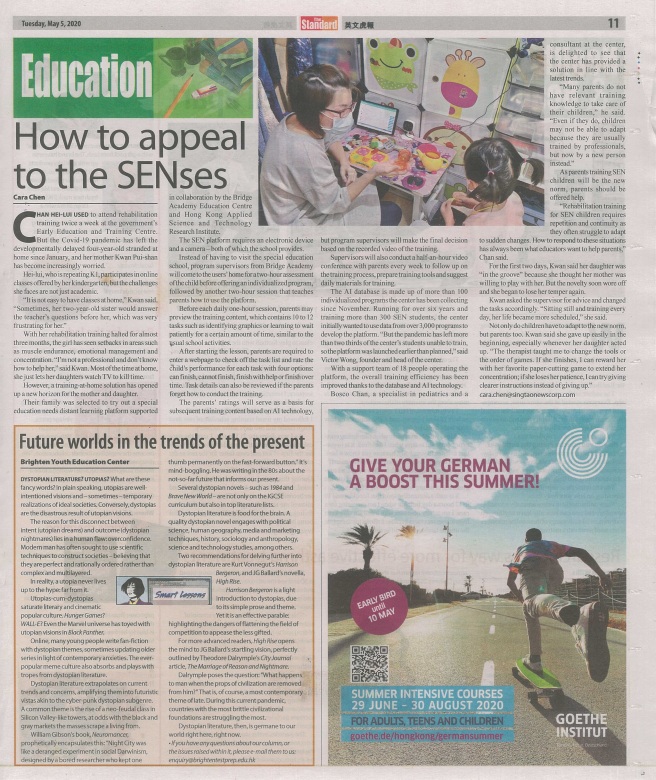 Open tomorrow with a live performance that begins at 3 pm, come find me!
It has taken me a long time to share these details from my album. Can’t wait to see you guys on the opening. Oh and when I said I’m moving on to pursue a career of my passion for art, it’s @desarthegallery 😊
Bear my straw hair and this office party host today is the most beloved person. And beyond that, the original caption is
not the best view so just got a little tanned, hair messed up and our feet injured by the stone…oh and a to-do list done for our next tanning date
Looking at @jessicazoobart ‘s frames is like looking out the window at the pouring rain, which echoes Hong Kong’s rainy season now- it offers a peaceful atmosphere of calm contemplation and an opportunity to calm down easily.
@jaychou x @sothebys : Big names make auction preview more interactive than ever before. And now we can travel to New York City in the 70s through the eyes of Jay Chou to see how the artworks fit perfectly with the everyday scene. Just like what Jay says that art is not unattainable.